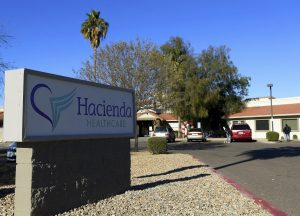 Earlier this month, a nursing home resident who had been in a vegetative state for eleven years gave birth inside Hacienda HealthCare, a nursing home in Phoenix, Arizona.  Caregivers at the nursing home have told investigators they were shocked and had no idea the resident was pregnant.  A frantic 911 call on December 29, 2018 by a nurse at the facility reported that a 29-year-old woman had given birth inside the facility. The nursing home staff tasked with providing care for the woman said they were unaware that she was pregnant until she started to moan right before giving birth on Dec. 29.   When police arrived, they found a baby that had been born to a woman who was “unable to move and unable to communicate.”  The nursing home specializes in the care of people with intellectual disabilities.  Court records show that the woman had been a resident of Hacienda HealthCare since 1992.

Phoenix police have already executed a search warrant seeking DNA samples from male staff members at the Hacienda HealthCare center.  The Arizona Department of Health Services and the state’s Department of Economic Security are also working with police in the investigation.  Sgt. Tommy Thompson of the Phoenix Police Department stated that the patient “…. was not in a position to give consent to any of this. This was a helpless victim who was sexually assaulted.”

Shortly after the assault, Hacienda HealthCare announced that it had hired former Maricopa County Attorney Rick Romley to additionally conduct an “exhaustive” internal review.  “Mr. Romley will have unfettered access to every facet of Hacienda’s business — including all the records related to this matter,” said a statement from Hacienda. “We will do everything we can to aid this review and, once it is complete, to make sure this unprecedented situation never, ever happens again.”

It is certainly worth noting that Hacienda HealthCare is currently rated “much below average,” or a one out of five-stars on the rating system used by the Centers for Medicare and Medicaid Services Nursing Home Compare website. Their last inspection was in December 2017 and the facility received six citations, including failing to maintain resident dignity while showering and false charting resulting in incomplete medical records for residents. The facility’s 2016 inspection had a similar outcome, with the facility racking up six citations.

While this particular case is an unusual one, tragically, sexual assaults inside nursing homes are not uncommon. Suthers & Harper has been fighting for victims of abuse and neglect in nursing homes for nearly three decades. If you suspect or know of abuse of a loved one inside a nursing home, contact the experienced nursing home attorneys at Suthers & Harper. Our attorneys have the knowledge and resources required to hold nursing homes accountable. Contact us now online or toll-free at 1-800-320-2384 for a free consultation.